Karp, Copland and Kirchner (and Bach) 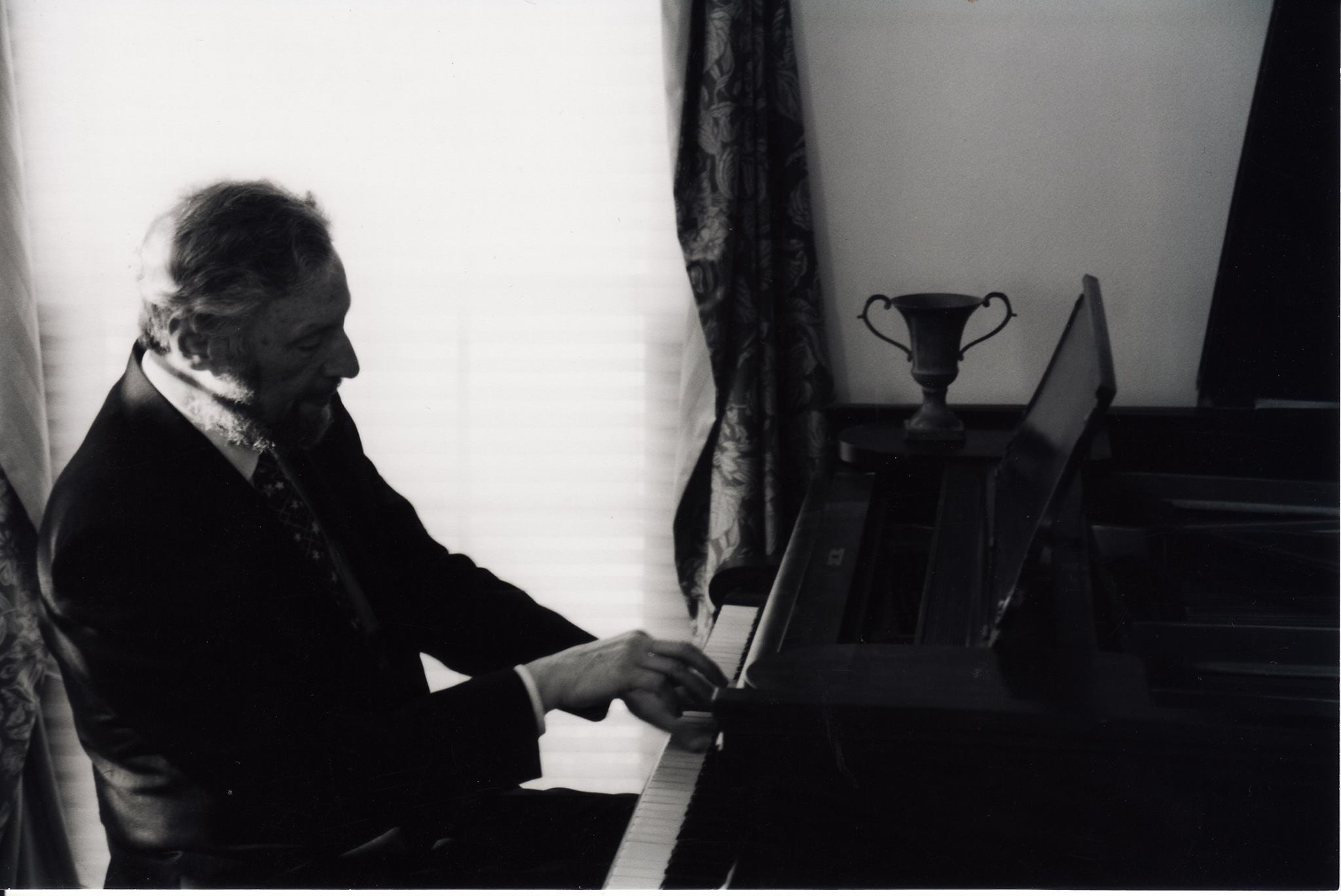 Leonard Bernstein was fond of saying of his friend and mentor that Aaron Copland was almost two composers, almost two men: one the smiling, genial, public composer of Appalachian Spring and Billy the Kid, and the other, more severe figure, “a cross between Walt Whitman and an Old Testament prophet, bearded and patriarchal.” Written in 1930, the Piano Variations are very much the work of Copland the severe, Old Testament prophet. “I have to confess,” says Howard Karp, “that when I first heard the piece, I didn’t like it— I found the language too dissonant and severe.” In the end, it was necessity that brought Karp back into contact with the piece. He needed to prepare a short work by an American composer for an audition, and began to look at the score of the Copland. “Gradually,” says Karp, “I became more and more fascinated by the piece, and began to think I should learn it. I played it to my wife [the pianist Frances Karp] and asked her what she thought of it. She said she didn’t like it at all, but that there was one strangely beautiful chord that attracted her. I asked her to point out the chord for me, and we went through the score together, only to discover that the chord wasn’t there at all— I’d been misreading something.” By this time, however, Karp had become deeply engaged with the work, and would go on to become one of its leading exponents.

The Piano Variations are the product of the earlier of the two “difficult” periods in the composer’s output. After some of the jazzier works of the 1920’s, notably the Piano Concerto and Music for the Theatre, Copland’s music quickly became spikier and more dissonant. It was in the mid-to-late 1930’s, largely in response to Copland’s concern for the welfare and spirits of his countrymen during the Great Depression, that Copland’s music began to embody a more accessible, vernacular style, with its touching evocations of Americana. But the Old Testament prophet was always there, and, after World War II, Copland returned to his “difficult” idiom, eventually even adopting his own version of Schönberg’s twelve-tone technique. Copland’s later experiments with serialism horrified some of his closest friends, not least Leonard Bernstein, who exclaimed; “Of all people, why you— you who are so instinctive, so spontaneous? Why are you bothering with tone rows and with the rules of retrograde and inversion, all that?” Copland’s answered simply: “I need more chords. I’ve run out of chords,” leaving Bernstein to lament that “that lasted for four more pieces and then he didn’t write any more. How sad for him. How awful for us.”

However, Bernstein, who knew the Piano Variations as well as anyone, seemed to forget that this early piece already, “shared certain features with Schönbergian serialism, but where Schönberg was passionately warm, Copland was passionately cold; where Schönberg’s writing was willfully luxuriant, Copland’s was painfully lean,” according to Copland scholar, Samuel Lipman. Additionally, where Schönberg’s rhythmic and gestural language is still rooted in the Romantic world of Brahms and Wagner, Copland’s rhythmic vocabulary in the 1930’s was, if anything, even more radical and uncompromising than his harmonic language. The work’s craggy contours elicited howls of protest from critics, not least Jerome Bohm in the New York Herald Tribune, who declared “ Mr. Copland, always a composer of radical tendencies, has in these variations sardonically thumbed his nose at all of those aesthetic attributes which have hitherto been considered essential to the creation of music.” However, in spite of its harsh sound world, the piece quickly took hold with many pianists, and within just a few years was considered a major addition to the American piano literature. Copland returned to the work in 1957 at the behest of the Louisville Orchestra, transcribing the piece as Orchestral Variations.

Brooklyn-born composer, pianist, conductor and teacher Leon Kirchner found his distinctive and uncompromising musical language after early studies with Arnold Schönberg. Kirchner never adopted Schönberg’s’ “twelve-tone” method, but instead took from his work with the Austrian master something of the older composers capacity for rhapsodic intensity grounded in a highly disciplined approach to motivic development. Never one to be drawn in by fads, trends or “isms” throughout his long career, his music was always both deeply passionate and seriously intellectual, the result of a compositional process that was as intense as the music itself. His former student, the composer John Adams, describes Kirchner’s approach to composition as “something akin to self-immolation.” In 1961, Kirchner joined the faculty at Harvard University, where he succeeded Walter Piston. In addition to mentoring several generations of young composers throughout his 28 years there, he was also active as the conductor of the Harvard Chamber Orchestra (an orchestra of Boston freelancers based at the University) and was an inspiring and exacting coach of chamber music whose understanding of and passion for the music of all periods found an outlet at Harvard in his famous course, “Music 180: Performance and Analysis,” where his students included de Yo-Yo Ma, John Adams and Alan Gilbert.  He was, according to Karp, “an awe-inspiring figure.”

Kirchner completed the first of his three sonatas for the piano in 1948 when he was in his late twenties. Kirchner was a virtuoso pianist, but although the Sonata makes great technical demands on the player, it is anything but a virtuoso showpiece. In this work, one can see the young Kirchner working out sophisticated strategies for managing to develop large-scale structures using a freely atonal language. It was just this challenge that led Kirchner’s former teacher, Arnold Schönberg, to abandon his one experiments with free atonality in favor of the more disciplined world of the twelve-tone technique.  All though Kirchner was by all accounts a man of commanding intellect, his approach to composition was temperamentally unsuited to the rigors of serialism. John Adams described him as ““most intuitive musician I ever encountered.”  Instead, Kirchner, both here in and in later works, employs a range of techniques and strategies in order to give his freely atonal language a sense of structure and direction, including but not limited to, the use of pedals as harmonic reference points, the use of cyclic devices, and strong sense of gesture.

Copland and Kirchner responses to Karp’s performances of these seminal 20th century works are memorialized by their grateful inscriptions in Karp’s copies of the scores (reproduced here).

Bach’s keyboard Partita’s where the product of his early years in Leipzig, where he moved in 1723. Composed between 1726 and 1730, the where the first works which Bach elected to have published as his “opus 1,” and were issued as Clavier-Übung (Keyboard Practice), Volume One. In a brief introductory note, Bach described the pieces as “Composed for Music Lovers, to Refresh their Spirits, by Johann Sebastian Bach.”

The Partita no. 4 in D Major was written in 1728, when Bach was forty-three. The work opens with an Overture in a grand style, by some measure the longest and most complex movement in the piece, and progresses through the traditional suite of Baroque dance movements, culminating in a Gigue that combines an irresistible rhythmic impulse with an array of contrapuntal fireworks to tax any performer to their limits.

Schubert’s Sonata in D Major, D 850, was only the second of his sonatas to be published. It seems fitting that this anthology should end with Karp’s elegant, dexterous and nuanced performance of the charming Rondo that finishes this sonata by the composer Karp says he reveres as much as any who ever put pen to paper.

American conductor, composer and cellist Kenneth Woods is Principal Conductor of the English Symphony Orchestra, Artistic Director of the Colorado MahlerFest and cellist of the string trio Ensemble Epomeo. He records for the Avie, Somm, Nimbus, Signum, MSR and Toccata labels.

Learn about Kenneth at www.kennethwoods.net

All material in these pages is protected by copyright.

This site uses Akismet to reduce spam. Learn how your comment data is processed.